Why would a candidate buy all the newspapers from the County leader in weekly sales? Maybe it had something to do with not wanting to see his opponents ads in the Times Voice. His opponent is Democratic County Judge Executive Jeff Noble. Noble is seeking a second term after a tumultuous 1st term where he had 3 Magistrates fight him on every single vote for the most part. All 3 Magistrates were handily defeated while Judge Noble beat several challengers to advance to the November 8th General Election.

Maybe it had more to do with a back page ad that shared Richardson’s multiple mug shots and one of his Court documents highlighting Richardson’s DUI and public intoxication arrests. APPCV has confirmed these arrests in Fleming County, and serving jail time in Mason County on a DUI plea.

Besides trying to hide these facts from readers of the Times-Voice by buying up all these newspapers, Mr. Richardson has put several politicians in a precarious position as their paid ads will not been seen by Times – Voice regular readers. The Times- Voice posted on Facebook that due to their papers being bout up, they would post their newsprint on line. HERE is the Link to read this issue.

Several politicians will not have their ads seen in the Times- Voice due to Harv Richardson and Mitchell Smiths attempt to hide the facts from voters by buying up all the newspapers. It is unknown how much money other politicians paid for their ads. It is also interesting to note how much money Richardson and Smith paid to gobble up all the papers estimated to be 3000 or more at .75 cents per copy.

Mitchell Smith is a resident of Buckhorn and has been Mr. Richardson’s personal driver since Richardson apparently isn’t allowed to drive. Richardson has also been rumored to live with Smith in Buckhorn which should prevent his running for any Breathitt County office.

APPCV will have more information as this story develops.

Here are the Politicians and customers who ran ads in the Time-Voice that will not be seen without checking the paper out online.

APPCV also  received an ad that ran in last month’s issue of MOUNTAIN LIFE that called for people to view the facts in this race.. 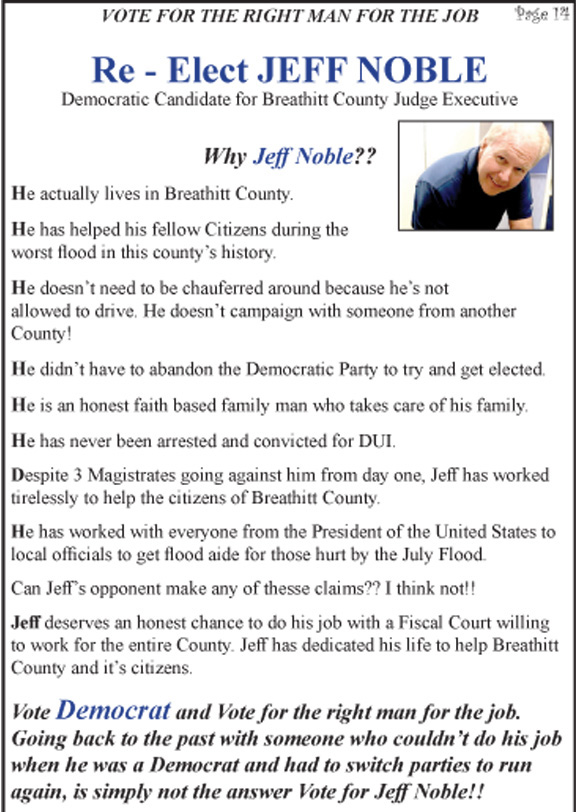 KSP Investigates Fatal Collision in Rockcastle County on I-75

London, Ky. (August 29, 2019) – On Thursday around 01:00 AM, The Kentucky State Police, Post 11 London was notified of a single vehicle injury accident on southbound I-75 near the 72 mile marker in Rockcastle County. The collision resulted in one fatality. The initial investigation indicates that a 1999 Dodge Q15 operated by Shawn […]

Woodbine, KY. (February 7,2020) –On February 7, 2020 at 12:47 a.m. Kentucky State Police, Post 10 Harlan received a call about an individual who left for work from the Woodbine community of Knox County and never made it to his location. Trooper Drew Wilson responded and began an investigation. Preliminary investigation indicates Ronnie Bryant (74) […]