4-15-22 Jackson, Kentucky
(Everything in this article has been verified by documents, videos and other news reports)
Breathitt County has had it’s share of bad news that has involved everyone from Political figures to everyday citizens. It is just part of everyday life in a small town.

Recently, the editor of the Breathitt County Advocate, Bobby Thorpe, found himself behind several allegations of Harassment and other charges, the worst of which involves the pepper spraying in the direction of a man and his wife and 5 year old child. The story was carried by WTVQ 36.

Since that time, the incident happened outside of the Breathitt Advocate has resulted in Mr. Turner filing another charge due to the alleged pepper spray assault. Along with this charge, another was filed by Mr. Turner’s wife on behalf of her and the 5 year old child that was present during the pepper spray attack.

We talked to Breathitt County Attorneys office and a request has been made with the Kentucky Attorney General’s Office to appoint a Special Prosecutor for all 4 charges. The Special Prosecutor will determine if the criminal complaints filed will proceed with Mr. Thorpe being served and charged and resulting in court cases with the charges.

UPDATE – Another Citizen of Jackson has filed a charge against Mr. Thorpe for Harassment in part due to a post Mr. Thorpe Allegedly made threatening posts towards Local business woman Lillian Jett of Jett Tours. The post calls Mrs. Jett a nut, a fool and even states she should take a one way trip. Mrs. Jett says she is in fear of her life after seeing this comment. 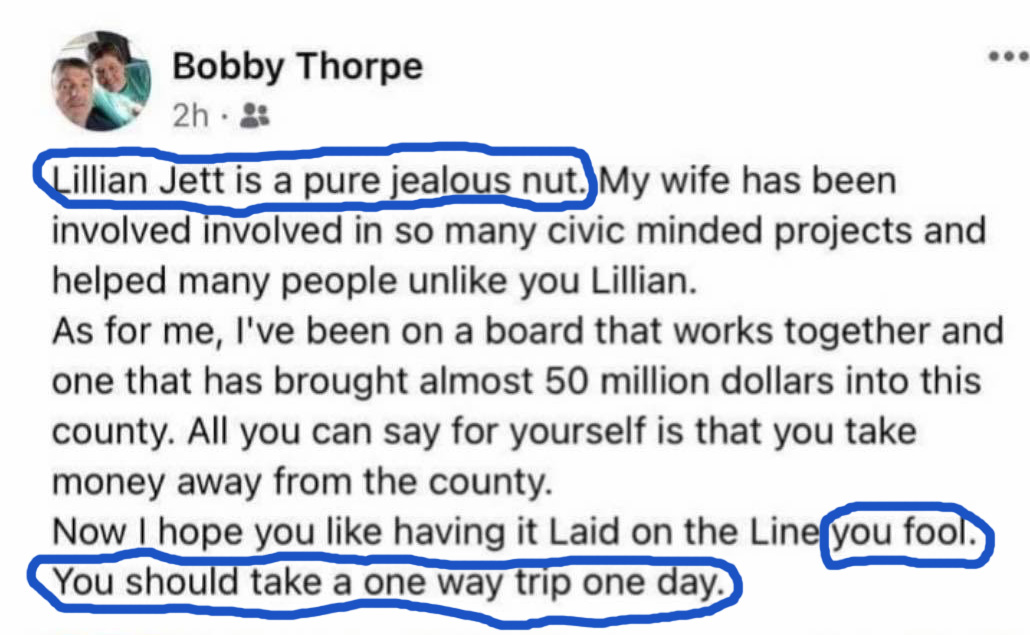 Mr. Thorpe as the Editor of the Breathitt Advocate is under attack from several people who claim to have been harassed or had articles printed that directly affected their lives. 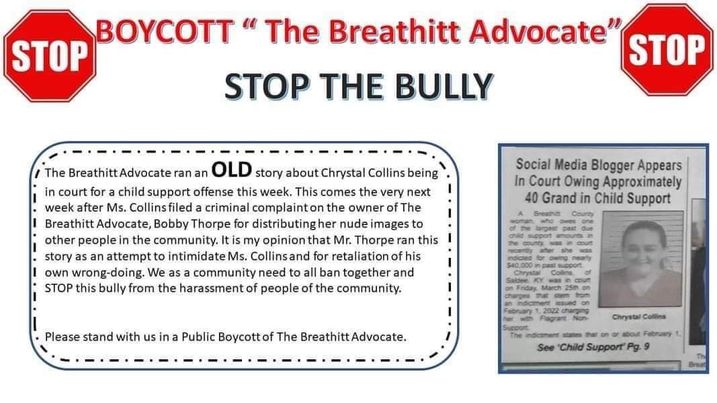 Boycott Advocate has been circulating the Internet as people look to exercise their first Amendment rights by Boycotting the Advocate and it’s supporters.One article in particle that ran was about the arrest of Sheila Roberts after a search warrant found a weapon in her home. The search warrant was for electronics pertaining of Mrs. Roberts alleged posting of MEME about elected officials and Breathitt County Workers. There were 7 people that filed criminal summons on Mrs. Roberts. NONE of these summons were arrestable charges. All were Misdemeanors and only required to appear in court. The Breathitt Advocate posted Mrs. Roberts arrest pic with the caption that stated the following: 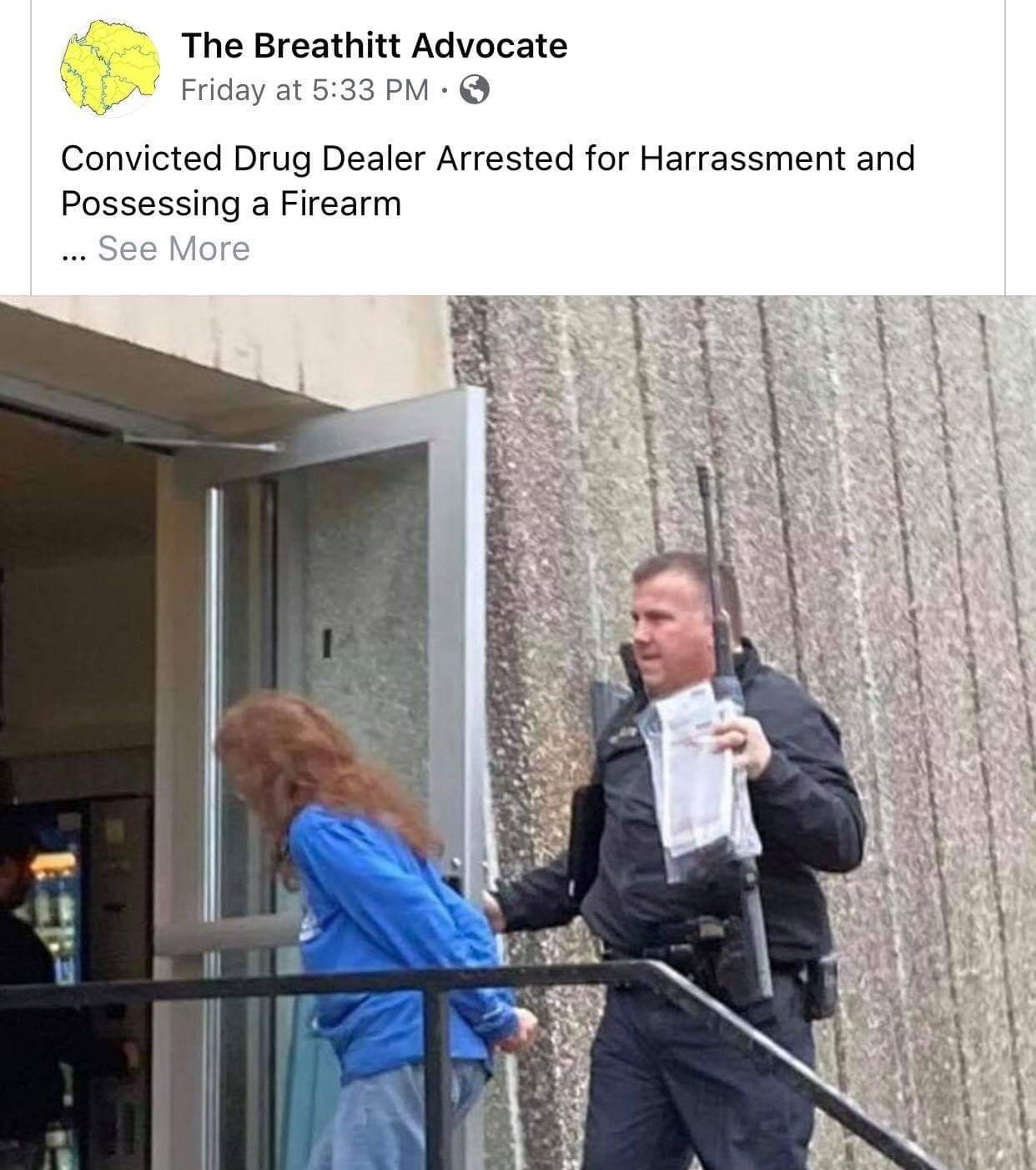 Mrs. Roberts was never arrested for harassment. The Advocate has never issued a retraction or an apology.
The judge in the case dismissed most of the criminal summons that the search warrant was based on. He also dismissed the weapon charge as well as stating the search was improper.

Appalachian Citizens Voice will have more as this story develops and when the Special Prosecutor decides if and when to file charges and serves them.

APPCV will also have complete story of dismissal of all charges against Ron Hamblin filed by Mr. Thorpe that started when Mr. Hamblin was informed by other Veterans that an alleged Stolen Valor case was happening and Hamblin questioned it. According to Hamblin he has been sending documents to an investigator showing harassment that has included in calling Hamblin everything from a pedophile to avoiding taxes with the County. All of these false stories have been proven to be outright lies, misinformation and used to allegedly harass Hamblin by Mr. Thorpe and his associates.

Every instance has been documented and sent to the Investigator looking at these harassment charges, fake accounts, threats and much more.

Since Hamblin contacted Investigators, dozens of people have came forth with documented information of alleged harassment, bullying, threats by Mr. Thorpe and his associates.
Hamblin said he is confident indictments will follow due to the unwarranted attacks.

APPCV will also have other documented instances of alleged threats and harassment by Mr. Thorpe. This includes screenshots and videos threatening to assault a woman.

This is an ongoing situation with several pending cases. APPCV will update when documents become available.

Hazard, KY (February 1, 2019) – Troopers with Kentucky State Police Post 13 in Hazard will be conducting Traffic Safety Checkpoints and Moving Patrols throughout the Post 13 area during the month of February 2019.  These enforcement efforts will utilize Troopers, Detectives, and KSP Commercial Vehicle Enforcement officers assigned to the Hazard Post area, which includes […]

Welcome to Appalachian Citizens Voice. Our goal is to bring you the top news stories in the region. We hope you will LIKE & SHARE us on FACEBOOK. Check back regularly for updated news and information. We welcome you!!