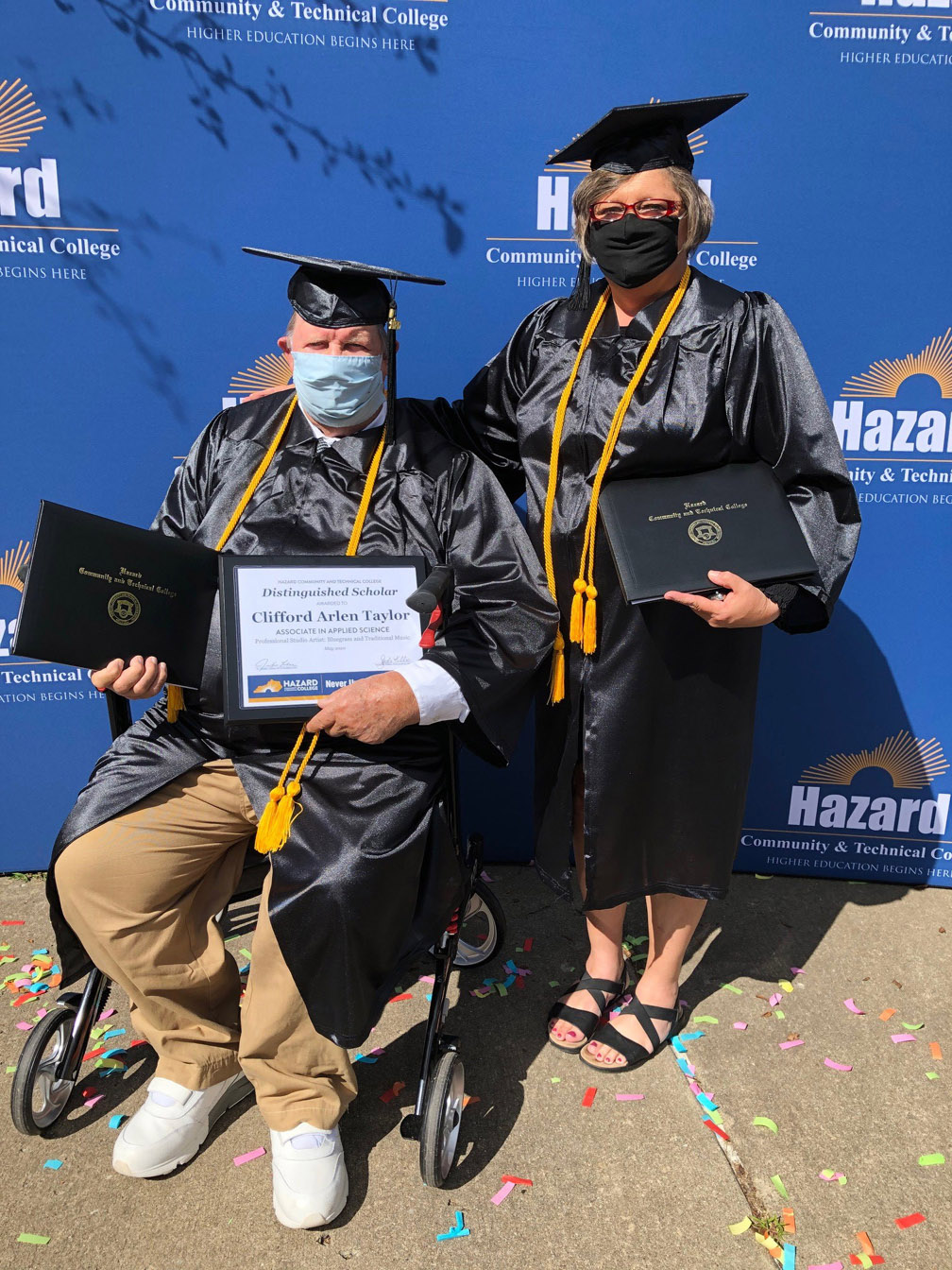 Clifford Taylor, age 85, and his daughter, Lydia Morgan, age 55, both graduated together on Saturday, Oct. 3 from Hazard Community and Technical College. Taylor was presented with the Distinguished Scholar award for having a perfect 4.0 in the Associate in Applied Science Program – Professional Studio Artist: Bluegrass and Traditional Music.

Father and daughter graduate together

It’s a proud moment when someone graduates from Hazard Community and Technical College and there was even more pride expressed when 85-year-old Clifford Taylor and his daughter Lydia Morgan, age 55, graduated on the same day.

Lydia Morgan said it was her Dad’s idea that they both be enrolled so in fall 2018, she started taking classes. “We’re very competitive,” she said, noting they were enrolled in some of the same classes, such as Appalachian Studies with Professor Tim Dunn and Bluegrass history with Dean Osborne, Director of the Kentucky School of Bluegrass and Traditional Music. Both Morgan and her dad enjoyed performing with the music school.

“HCTC was a wonderful experience for us both and I would recommend HCTC to others,” Morgan said. She gives high praise especially to the music school faculty. “My Dad is hard of hearing and disabled, but everyone there was very accommodating to him,” she noted.

Morgan plans to enroll at Eastern Kentucky University and major in Social Work in 2021.

While Taylor was a student, he was one of two recipients of the KCTCS All-Academic Team award. This is one of the most prestigious HCTC honors given to students. Dean Osborne praised Taylor because of his commitment to lifelong learning. Taylor is an U.S. Army veteran, serving in Vietnam and Germany, and earned a Bronze Star and many other military awards. He has served as educator and coach in Texas and the Leslie County Schools. When Taylor was honored​, Osborne noted  Taylor’s skill as a poet and songwriter: “He brings a strong and honest energy that impresses everyone he meets. Mr. Cliff is not afraid to risk sharing his songs with the world. All of us who write and perform understand the fear that goes along with letting others hear our creations. He not only overcomes that fear, but also teaches some great life lessons about never giving up on doing what you want to do.”

Taylor has penned the lyrics for about 80 songs and, with the collaboration of instructors and students at the school, turned 20 plus lyrics into songs. One of these songs, which he co-wrote with instructor Virgil Bowlin, was recorded by a band at the school for release. He and Dean Osborne are preparing to record two songs.​

Morgan is a caregiver for her father and they both live in London. Her previous jobs include ​work with Community Ministries in Hazard and AmeriCorp in Leslie County. She looks forward to a future of helping others.

Lost Creek, KY. (October 27, 2020) – One person is dead following a residential fire in the Lost Creek Community of Breathitt County. On October 26, 2020, at approximately 4:53 A.M, firefighters with Watts-Caney Fire Department responded to the residence on KY-476 and located what they believed to be a deceased person inside. Troopers and Detectives with […]