Hazard, Ky. (October 28, 2019) – The Kentucky State Police Post 13 welcomes one new Trooper to their ranks.  Kevin Day of Hazard, KY was among forty-eight cadets to graduate the training academy in Frankfort on Friday, October 25, 2019. The graduates consisted of a traditional class beginning on May 12, 2019 and a Law Enforcement Accelerated Program (LEAP) class, joining on August 4, 2019. Applicants for the fifth LEAP class were required to have two years of service in Kentucky and completion of their DOCJT training no later than May 1, 2017. The total number of graduates were among the 89 who initially reported. 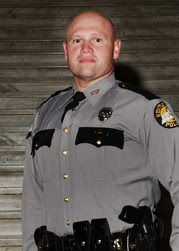 Field training officers will supervise the new Troopers for twelve weeks before working their assigned area.

The cadets are the third group to benefit from new hiring guidelines established by the legislature in 2017. Through this revision, anyone who possesses a high school diploma or GED and has three years of full-time work experience can apply for employment as a Kentucky State Trooper and earn an associate’s degree during the training process.  (If you have a cadet that received a degree – they should be listed here)

For information about a career as a Kentucky State Police Trooper, visit the KSP Recruitment website at www.joinksp.com. Applicants may also call the Recruitment office toll-free at 1-866-360-3165 during office hours from 8 a.m. to 4:30 p.m. (ET) Monday through Friday or leave a message any other time.

FRANKFORT – Saying it’s past time for Kentucky to join the 11 other states that have legalized recreational cannabis for adults, state Rep. Cluster Howard has pre-filed legislation that would govern home use and commercial sales while dedicating a sizable portion of tax and license revenues to the state retirement systems’ unfunded liabilities.  His bill would […]

Brother is charged with murder. Colson, Ky.  (September 10, 2019) – A Letcher County man was found shot to death at his residence early this morning and a relative has been charged with his murder.  Troopers with Kentucky State Police Post 13 were called to a residence on Cane Hollow Road in the Colson community […]